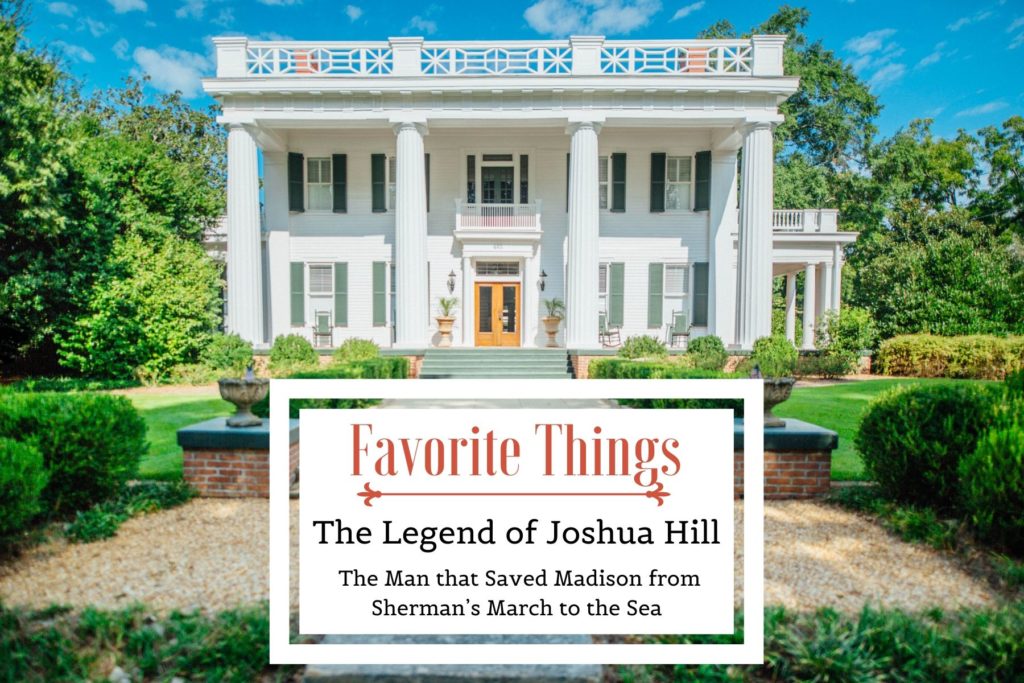 The Legend of Joshua Hill: The Man that Saved Madison from Burning

Every story has a hero that saves the day when it seems all hope is lost. For the beautiful town of Madison that hero was – and still is – Joshua Hill. Though outside our small community his name may have been neglected in the history books, here his legend and his home still hold a prominent place in our hearts. As the most historically significant home in Madison, the Joshua Hill House stands as a reminder of the significant contributions this legend made to our community.

Joshua Hill’s home sits prominently on its own block, leaving visitors in awe as they drive into town and even earning recognition from Southern Living magazine when it recently went up for sale. But Madison isn’t where this story begins. Joshua Hill was born in 1812 in Abbeville, South Carolina.  As a young man Hill relocated to Monticello, Georgia, to study and practice law with his brothers.  There he married Emily Reid and started the family that would grow to four girls and four boys.  In the late 1840s, the Hills moved to the more prosperous railroad town of Madison where they would live the rest of their lives.

Long active in politics as a Whig, Hill won election to the U. S. House of Representatives in 1857 succeeding another Madison lawyer, Nathaniel Green Foster.  As the Civil War approached, Hill was a strong Unionist – an outspoken opponent of secession.  When Georgia withdrew from the Union in January 1861, Hill resigned from the House.  Hill retained his Unionist sentiment and never held office under the Confederate government.

In the Spring of 1864 General William T. Sherman left Chattanooga and began his advance to Atlanta.  Despite their father’s Unionist sentiment, two of Hill’s sons, Clarence and Legare, entered the Confederate military.  Legare fell to a Union sniper bullet near Cartersville as Sherman pushed south.  His older brother served in Virginia and in Georgia.  Atlanta fell to Sherman in early September, and Joshua Hill used his contacts to obtain permission to retrieve Legare’s body from the field and return it to Madison.  On this mission he met with Sherman in Atlanta as part of the general’s ultimately unsuccessful effort to remove Georgia from the war without further military action.

Sherman’s army left Atlanta to begin the famous “March to the Sea” in mid-November 1864.  Madison, astride the Georgia Railroad, was in the direct line of the left (northern) wing of the March, which was under the command of General H. W. Slocum.  Gen. Sherman’s Special Field Orders No. 120 set the rules of engagement:  V. To army corps commanders alone is entrusted the power to destroy mills, houses, cotton-gins, &c., and for them this general principle is laid down: In districts and neighborhoods where the army is unmolested no destruction of such property should be permitted; but should guerrillas or bushwhackers molest our march, or should the inhabitants burn bridges, obstruct roads, or otherwise manifest local hostility, then army commanders should order and enforce a devastation more or less relentless according to the measure of such hostility.

Having heard of military devastation in northwest Georgia and in Atlanta and being unaware of Sherman’s orders, white residents in line of the March feared the worst for their towns.  Meanwhile, the enslaved people, constituting about 70 percent of Morgan County’s population at the time, anticipated with joy the approaching soldiers whom they regarded as liberators.  As the Union army neared Madison, Joshua Hill, taking advantage of his reputation as a Unionist and his association with Sherman, approached the officers of the oncoming forces.  He urged them to restrict their destruction to sites of military significance only, which for the most part they did.  Union soldiers destroyed the depot, slave pens, cotton warehouses, and related buildings; but residences and most businesses were left undisturbed.   By this action Hill acquired the reputation as the man who “saved” Madison from destruction.  It is indeed likely that Hill’s intervention induced the Federal forces to be somewhat more circumspect in Madison.  However, despite later “lost cause” memories, it should be noted that none of the towns in the line of the March of the left wing were substantially destroyed.

During the Reconstruction Period Joshua Hill aligned with the moderate faction of the Republican Party – the party of Lincoln and Grant.  At that time state legislatures rather than voters chose United States Senators, and in 1868 the Georgia General Assembly elected Hill as Georgia’s first (and until 1981 only) Republican Senator.  Hill actually took his seat in January 1871 following over two years of political squabbling.  After leaving the Senate in 1873, the prominent Madisonian retired from active politics save for serving as a delegate to the state Constitutional Convention in 1877.  He died in 1891 at 79 years of age.

Built around 1842, the Joshua Hill home stands in the Madison Historic District. But in fact, Joshua Hill would hardly recognize the house as we see it today.  It owes its grand columned Neoclassical Revival splendor to a renovation done by W.W. Baldwin in 1917.  The house was further enlarged in the first decade of the 21st Century.

Madison is renowned for maintaining one of Georgia’s largest National Register Historic Districts, which includes the Victorian-era downtown encircled by antebellum, Victorian, and turn-of-the-century neighborhoods. Today, people from all over the world come to look upon the home of Joshua Hill and seek to understand the immense amount of history that took place within those walls. The Joshua Hill house stands as a reminder that one man can truly make a difference in his city, state, and nation.

Back to Main Site