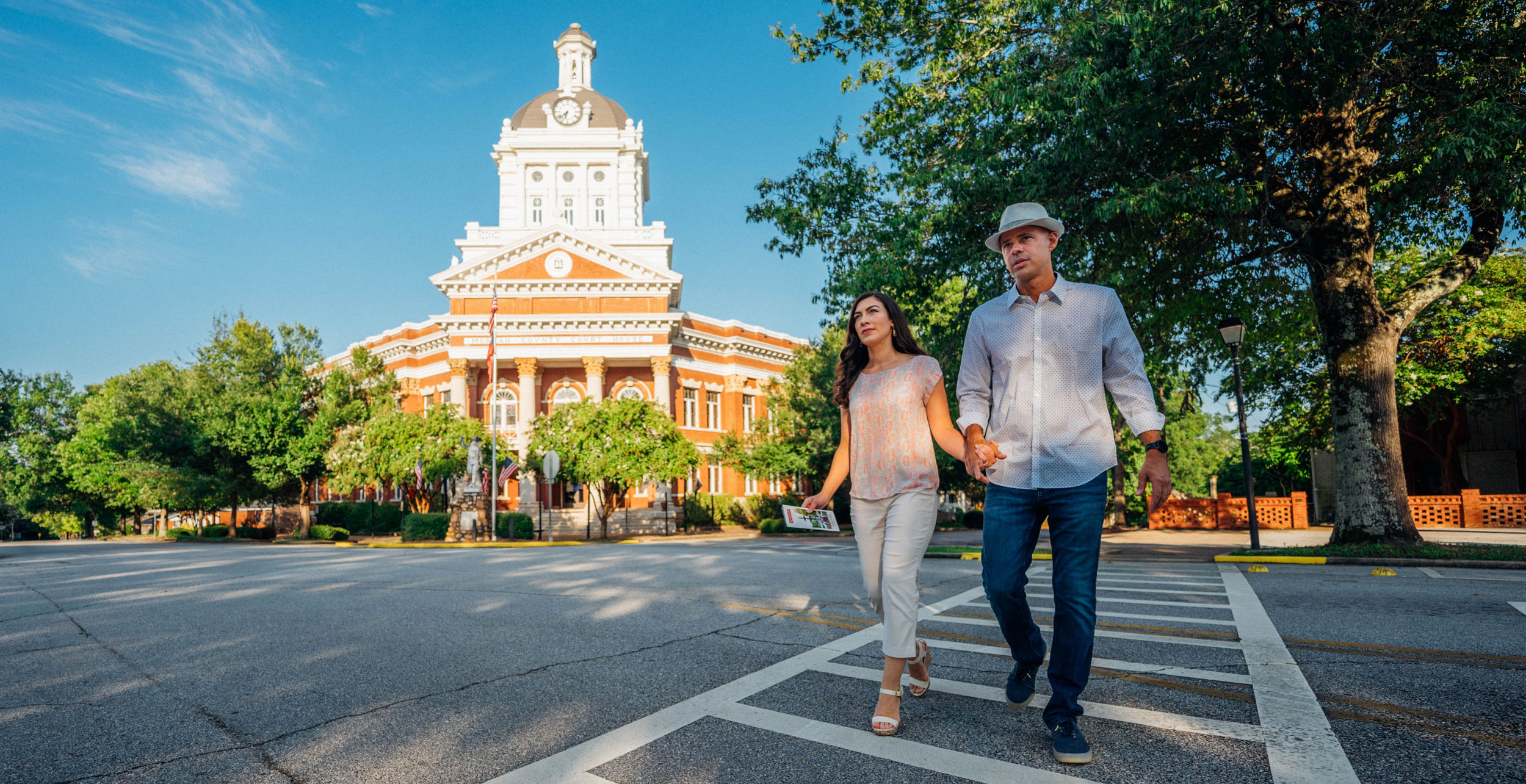 Whether you’re looking for somewhere to start your trip in Madison or you want to be a tourist in your own town, our self-guided audio walking tour is the perfect stroll through Madison’s history! Free in the Apple App and Google Play stores, the ‘Madison, GA Downtown Tour’ app guides you on a mile and a half, self-guided tour of the historic district. Go at your own pace and take in the beautiful antebellum homes and their stories. Charge your Fitbit, put on your walking shoes, and lets get in our 10,000 steps!

Our tour starts at the Welcome Center. Come on in to say hello and get more information about Madison and Morgan County! As you make your way through the 26 stops, use the app to take pictures with the Madison logo on them (a perfect way to document your trip)!

Built in 1887 as the town’s first fire house and city hall, the building now houses our office.

Built in 1905, the Morgan County Courthouse is the third courthouse to serve the county. Designed in the Beaux Arts style, this beautiful building was built in 1905.

Note: The Rogers House & Rose Cottage are both open for tours daily by appointment only. Visit here for tour information.

This grand hotel once stood on the corner of Jefferson and East Avenues.  Home to not only the hotel, but stores, permanent residences, and even the town’s library, the structure was lost to fire in the early morning hours in November 1930.

Home to the first two county courthouses and now the town’s post office, Madison’s square has seen quite its share of transformations over the last 200 years.

The details of the Dovecote House’s exterior are simply exquisite, but it hasn’t always looked like this. These exterior details were added much later after the original home was built in the 1830s.

Heritage Hall is open for tours daily by appointment only. Visit here for tour information.

Madison’s churches have a long history in the community. Learn more about the Madison First United Methodist Church and the Madison Baptist Church.

Once a Catholic church, the Magnolias House and its neighbor, the Madison Presbyterian Church, are rich in history.

Majestic and full of wonder, the Jessup-Atkinson house was once home to one of Madison’s more famous residents.

Visit the Madison-Morgan Cultural Center to see one of its permanent or rotating art and historical exhibits.

The Baldwin-Ruffin-Lanier house is the original and only remaining only building of the Georgia Female College, a Baptist school chartered in 1849.

Known as “The House of the Three Brides,” the Fitzpatrick House has lots of stories to tell.

You can follow the Hunter House on Facebook for up to date happenings with this historic beauty!

La Flora lives up to its name in beauty as well as history.

Does this home look familiar? Perhaps you’ve seen it on the television shows, Vampire Diaries or it’s spinoff, The Originals?

The Godfrey-Hunt home was built in Madison’s first subdivision, part of the original Town Commons.

When the original 100 acres, establishing the city of Madison in 1809, was designated by Georgia Legislature, unplatted land was referred to as the Town Commons. The area had a wide variety of uses including pastureland, farmer’s markets, and even a horse racetrack!

The Stagecoach House was once a a popular stop and inn along a well-traveled stagecoach route.

There is so much history in the Stokes-McHenry home. It’s one of the oldest homes in town!

Also known as Broughton Hall, this immaculate home has hosted grand parties on this lush lawn.

Stop 23: Episcopal Church of the Advent

The Episcopal Church of the Advent building dates back to the 1840s and originally hosted the Methodist church.

With its double facade and twin parterre gardens, Boxwood is a marvel of design and landscape.

Learn all about Madison’s African-American history through the Morgan County African American Museum and neighboring Calvary Baptist Church, then head over to Round Bowl Spring park to see the spring that was the life source of early Madisonians.

Wrap up your tour with a stroll through Town Park. Built for the town’s 200th Bicentennial in 2009, the park hosts many yearly festivals and events,

« 5 Reasons Why There’s No Place like Madison for the Holidays
Collector’s Capital: Why Madison is your Next Antiquing Destination »

See Us on Trip Advisor: