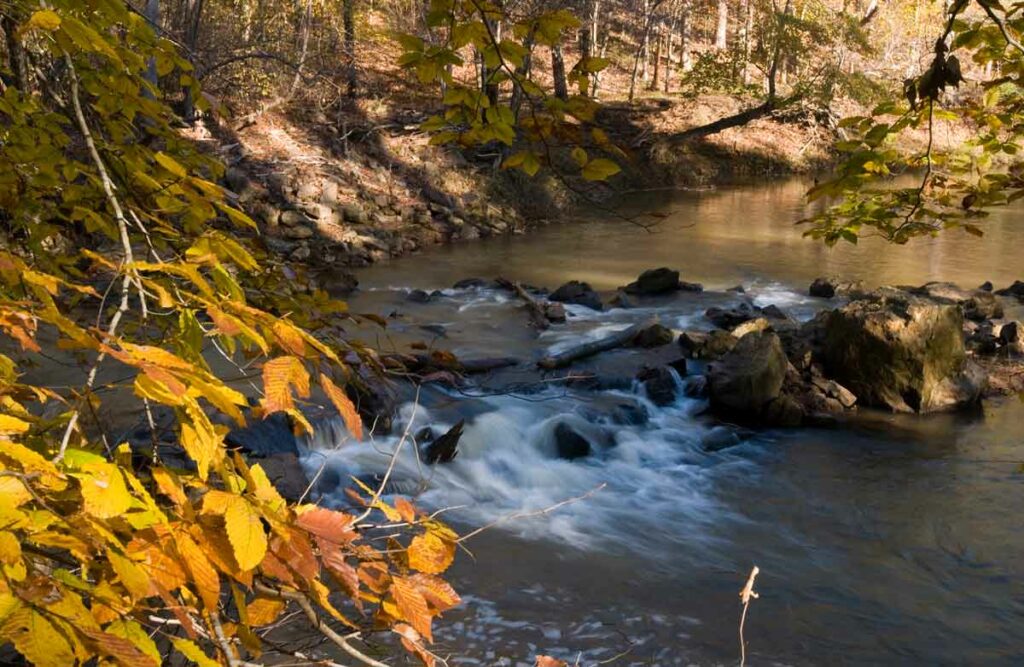 Have you ever travelled somewhere new, taken in the natural beauty of the outdoors and breathed a little deeper? Many visitors do just that as they explore the second largest state park right in Madison’s backyard – Hard Labor Creek State Park. After all, Morgan County is renowned for beauty and charm. But have you ever wondered how the park came to be or about the history of the land itself? The answers might surprise you.

The land that is now Morgan County once belonged to the Lower Muskogee Creek Tribe. In 1802, the land was ceded in a treaty to the United States.

The 1802 Treaty of Fort Wilkinson countered the 1790 Treaty of New York that offered “permanent peace and friendship” for the Creek Tribe and demarcated land guaranteed to the Creek Nation, which was signed after a series of conflicts between the Native Americans and Georgians in the 1780s known as the Oconee Wars and outlined steps to lead the Creek Nation to a “greater degree of civilization.”

Morgan County was officially founded in 1807 on land from the Creek cessions of 1802 and 1805 Treaty of Washington. The City of Madison was subsequently chartered in 1809. As more people settled the area, forests were cut down and replaced with structures and agricultural fields. Want to learn more? Visit the Madison-Morgan Cultural Center, and see its exhibit on the history of the Piedmont area.

With the rise of cotton farming and other agricultural products, low walls of earth – terraces – were built to prevent erosion along slopes. More than two hundred years later, these step-like features are still noticeable today in Hard Labor Creek State Park while other land-use practices caused erosion – a prominent ravine on the Lake Brantley hiking trail is evidence of this. Look around. Can you see it?

During the 19th century, Morgan County had one of the highest enslaved populations in the state – over 70 percent of the county total. Prior to the Civil War, enslaved people worked the fields on plantations. One local plantation owner who had 3,000 acres of land stretching out to Hard Labor Creek State Park and enslaved 113 people was Dr. Elijah Evans Jones, an owner of Heritage Hall. Located in Madison’s Historic District, Heritage Hall is one of the stops on the free, self-guided walking tour and is also a house museum open to the public.

In 1916, the boll weevil appeared in Morgan County. This beetle, which feeds on cotton buds and flowers, caused 15 years of agricultural and economic destitution in the region. As a result, the growth of the town slowed as many people moved away from the area that was in its own economic depression. Can you believe that, between 1920–1930, Morgan County went from 20,000 to 12,000 residents and has never exceeded that population since?

In response to the boll weevil, other crops replaced cotton including peaches, pecans and, significantly, pine trees. Pines propagated quickly and naturally, and were also planted on the terraced land, which was often severely eroded due to over-cultivation. Today they still indicate where past agricultural fields lay while areas with deciduous trees were historically deciduous.

Morgan County still had not recovered by the time the Great Depression swept the nation (1929-1939).

Construct a Story: The CCC

Due to the significant effects of the stock market crash of 1929 that started the Great Depression, President Franklin D. Roosevelt sponsored a New Deal program to create jobs. Part of this effort was the Civilian Conservation Corps (CCC).

The CCC constructed Hard Labor Creek Recreational Demonstration Area in 1934 on 5,804-acres acquired by the National Park Service with plans for it to be a National Park. The reforestation and recreational usage effort involved planting 850,000 trees and constructing two lakes including the 274-acre Lake Rutledge. The CCC, together with the U.S. Forestry Service, were responsible for many of the park’s original structures and landscapes such as roads, bridges, retaining walls, Camp Rutledge and several facilities at Camp Daniel Morgan.

Consider how much time and effort it took to accomplish these tasks? How much do you think the men were paid?

Members of the CCC were paid roughly $30 for a six–month enlistment, $25 of which was sent directly to enlistees’ families.

Thought to be named for either the enslaved people who worked the fields or the indigenous people who found the creek difficult to cross, Hard Labor Creek became a National Park in 1939 and remained so until 1946 when it was turned over to the state of Georgia. Listed on the National Register of Historic Places, Hard Labor Creek State Park contains the only surviving CCC camp in the state.

Today, visitors may enjoy Georgia’s second largest state park by hiking, biking, or horseback riding on 20+ miles of trails; swimming; golfing; kayak and boat rentals; ranger-led programming; events and camping in RVs, tents or cabins. They can also learn more about the park’s history through interpretive signs, historic markers, and remnants of the CCC camps.

Come for a visit, immerse yourself in nature, look around and take a deep breath. What history will you discover in the landscape of today?