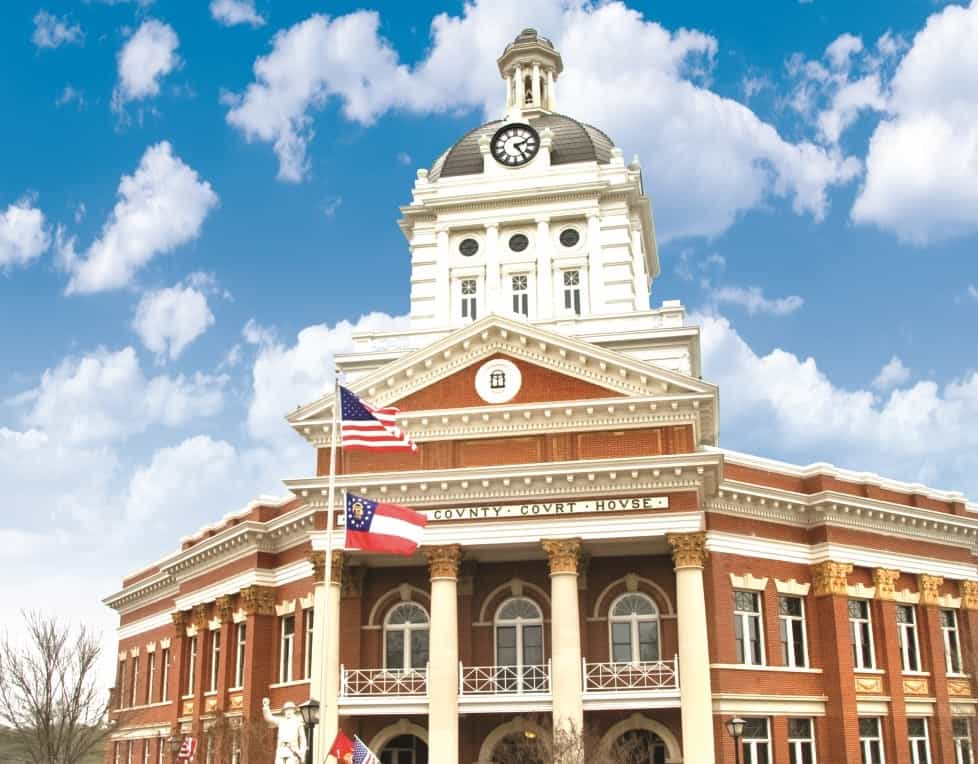 It’s no secret that Madison and its surrounding towns are chock-full of history. What may be a surprise to you is there are several historical sites we bet you haven’t discovered yet! Some of the most popular historic attractions in Madison are our home museums, the expansive Historic District, and the Madison-Morgan Cultural Center, which are must-sees for the first time visitor! But what’s next? Read on to learn about 7 secret spots from Madison to Bostwick you’ve been missing.

If you’re in Madison, you’re sure to notice the gorgeous courthouse overlooking the town square. While we can marvel at the domed Neoclassical Revival architecture from this 1905 building from the sidewalk, did you know you can go inside? If court isn’t in session, try going in and asking the bailiff for a tour. The incredible woodwork will take your breath away!

Tucked just behind the courthouse is what is currently the Morgan County Archives building, but before that it served as the Morgan County jail! The Archives office is open Mondays, Wednesdays, and Thursdays from 11AM-4PM; you’ll find 19th and early 20th century deeds and land titles, marriage records, family histories, burial locations, details of Morgan County history, and many other similar types of records which are useful in all kinds of research here. Just try not to lose track of time in this fascinating building!

The Morgan County African-American Museum is an institution dedicated to preserving African-American heritage and promoting awareness of the contributions to the culture of the South. Open Tuesday-Friday 10:00am-4:00pm and every first and third Saturday of the month from 10:00am-4:00pm, make sure to get a tour of the old Horace Moore House donated to the MCAAM by Rev. Alfred Murray and moved to its current location in the Historic District.

The city of Madison established public burial grounds almost since its founding. You’ll notice that Madison Historic Cemeteries serves as one large, secular cemetery with four sections instead of each denomination having their own cemeteries across the city. Walk the grounds and discover Madison’s past using this Cemetery Walking Tour to learn about Confederate soldiers and Civil War hospital attendants laid to rest here, headstone symbolism, and other notable historical figures that shaped Madison in the 19th century.

Although a little spooky, Nolan Plantation on Highway 83 in Bostwick is a gorgeous example of antebellum architecture from the 19th century. The Nolan Farm was founded in 1856 and covered nearly 2,000 acres in Morgan County! Cotton was king during this time, and you’ll find this home surrounded by an old commissary, the remnants of a blacksmith shop, and a few tenant homes. There is a reason why this abandoned home has been photographed so much!

As the Historical Marker for this schoolhouse states, “The name Apalachee is derived from the Indian Tribe that was part of the Creek Confederation, though there is no evidence that this tribe had ever settled in this area. The town of Apalachee was incorporated by the Georgia Legislature in 1907. However, this community has roots that are much older. The area around Apalachee was settled prior to 1820 and is considered to be one of the oldest communities in Morgan County.” Pretty cool, huh?

The Susie Agnes Historic Hotel building now houses the Bostwick City Hall. Built in 1902 by the town’s founder, John Bostwick Sr, he named the hotel for his wife and sister. In 1993, the building was given to the city and is preserved by proceeds from the annual Bostwick Cotton Gin Festival, home to the largest tractor parade in the world! As a bonus, if you love the movie My Cousin Vinny, you’ll recognize this place as the Parker Hotel!

It’s no secret that you can find amazing pieces of history all over our county. If you still haven’t gotten enough historical hotspots, check out our History & Heritage Itinerary here.